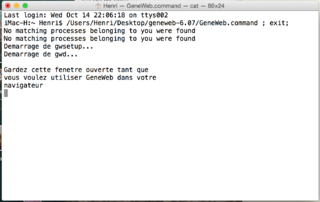 Installing multiple versions of GeneWeb is possible. The following section describes one possibility. One of its benefits is to make more explicit several aspects of the folder structure expected by GeneWeb.

All the genealogy files are located in a folder called Genealogy sitting in “Home”, and containing two sub-folders "GeneWeb" (sources and binaries. This folder may be called bases in subsequent discussions and examples) and “GeneWeb-Bases” (bases and other base specific data. a specific base may be called base in the following discussions and examples) and two command files launching each one particular version of gwd and gwsetup (Starting gwd): 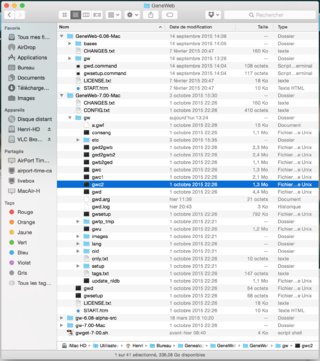 The folders GeneWeb-x.yy-Mac contain copies (or moves) of the distribution folders created from sources for each version, or directly downloading (zip file) from a trusted source.

The folder GeneWeb-6.08-Mac contains a bases subfolder because the file gwd.command was executed which creates a bases folder right there. This folder is not used anywhere else in this setup (and could have been removed).

This setup has the advantage of maintaining active at least two running versions of GeneWeb which may be handy for moving bases from one version to the other. In each GeneWeb-x.yy-Mac folder, a sub-folder gw contains all the executable files and associated data (default a.gwf, etc, images, lang, src sub-folders). gwsetup itself uses the setup sub-folder for its data.

gwd.log contains the log traces produced by gwd. May be useful for some debuging!

Note the tags.txt file containing the list of HTML tags authorized within the notes associated with each person (see Tags). 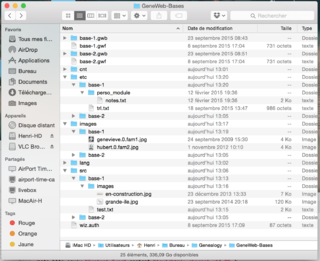 Bases are stored in .gwb folders. Each base may have its parameter .gwf file. If no parameter file exist, gwd will use the a.gwf default parameter file found in GeneWeb/GeneWeb-x.yy-Mac/gw

Other folders contain the following data:

One or several .auth file may reside here, as referenced in the .gwf files for friends and/or wizard authentication. 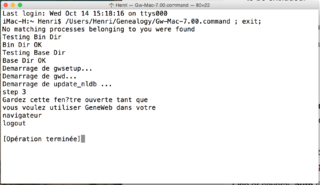 With this folder organisation, clicking on $HOME/Genealogy/Gw-Mac-7.00.command (whose content is here) will open a terminal window, kill previously running versions of gwd and gwsetup, start a fresh one and open the start page. 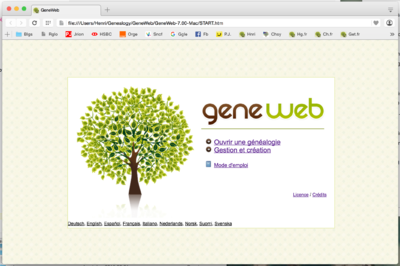 For the diehards, here are all the parameters that gwd accepts at launch time:

The folders gw-x.yy contain sources for version x.yy of GeneWeb. Executing the Makefile in this folder (see Installing OCaml) will create a distribution folder containing all data necessary for execution if GeneWeb. Renaming this distribution folder to GeneWeb-x.yy-Mac and moving it into the GeneWeb folder discussed above brings us to a known situation.

The file gwget-7-00.sh is a shell script that will fetch the latest version of GeneWeb version 7.00 from the GitHub repository, compile it and move the resulting distribution folder appropriately.